When Leonard Shubert rolled into Chico in 1938 and decided it would be a great place to start an ice cream business, some of the locals were skeptical. 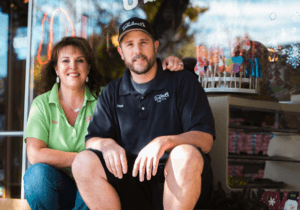 Indeed, Shubert’s is a North State icon, with lines regularly wrapped around the block on summer evenings to enjoy one of its 30-odd varieties of ice cream and 30 more kinds of hand-made candy. In fact, 10 years ago, it was recognized by ABC’s Good Morning Americaas one of the nation’s two best ice cream stores.

Still housed in its original downtown location, the Pulliam family this year finally opened a second location in the city’s major shopping mall to meet the demand.

Reynolds said the secret to Shubert’s continuing popularity is the family’s commitment to quality.

“Everything is made on site and only family members and one other person make our products,” said Reynolds, who handles the marketing and business end of the business while her brother, Nathan Pulliam, is in charge of production.

All the candy and ice cream are still handmade using many local ingredients, including butter, cream, honey and nuts. Even the seasonal treats, such as boysenberry sundaes in the spring, watermelon sherbet in the summer, and pumpkin ice cream in the fall, contain locally grown produce to give them that distinctive homemade taste.

Family members have been deeply involved since the beginning. After a Depression-era insurance business in Montana failed, Shubert purchased an ice cream machine and headed west to find a location. When he drove into Chico, with its tree-lined Esplanade, he knew it was where he wanted to build his business.

(Reynolds notes the original ice cream machine is still in use and is a secret to the business’ success as it makes a different product than more recent machines.)

As business grew in the late ‘30s and early ‘40s, Shubert brought family members out from Missouri to help out, including a nephew, Charles Pulliam, who eventually bought the business. Pulliam’s son, Chuck, took over from his dad and now the fourth generation is in charge.

While Nathan had been working at the store since high school, Reynolds spent some time in Corporate America, noting that having five family members working together was enough (grandpa, grandma, mom, dad, and brother all worked at the shop). She worked for large companies for several years until her mother died suddenly.

Because Reynolds was the only family member who had been taught how to hand-dip chocolates, she came back home. In fact, the candy side of the operation – almost a separate business – has been an important part of Shubert’s success over the years, as it keeps the customers coming in over the holidays and at Valentine’s Day when ice cream sales are low.

And that blend of ice cream and candy came together nicely in perhaps Shubert’s signature product – Chico mint ice cream, a reversal of most mint-chip ice creams because it’s chocolate ice cream with chips from the company’s handmade mint candy.

As with most family businesses, there are advantages and disadvantages to owning your business.

“There’s a lot of hard work and there are times the kids have to sacrifice and maybe not go on vacation when their friends do, but next Thursday I get to be a field trip driver when other parents don’t have that kind of flexibility,” she said

She joined FBA because she believes small businesses need a bigger voice.

“I used to do a lot of advocacy, but now that the business has grown and I don’t have time to fight for small business, I thought it would be important to join an organization that is acting as my eyes and ears about what is going on in Sacramento while I’m running my own business,” she said.

Reynolds is still directly involved in advocacy, however. She’s running for a seat on the Chico City Council this fall and while distressed about some recent vandalism around the store by people opposed to her right-of-center views, she is feeling good about her campaign and hopes to be able to bring diverse groups together if elected.