Pini Hardware: Owned by different families along the way but a family business for 100 years

Sometimes, a family business is owned by several families along the way. Such is the case with Pini Ace Hardware in Novato, which is celebrating its 100thanniversary this year. 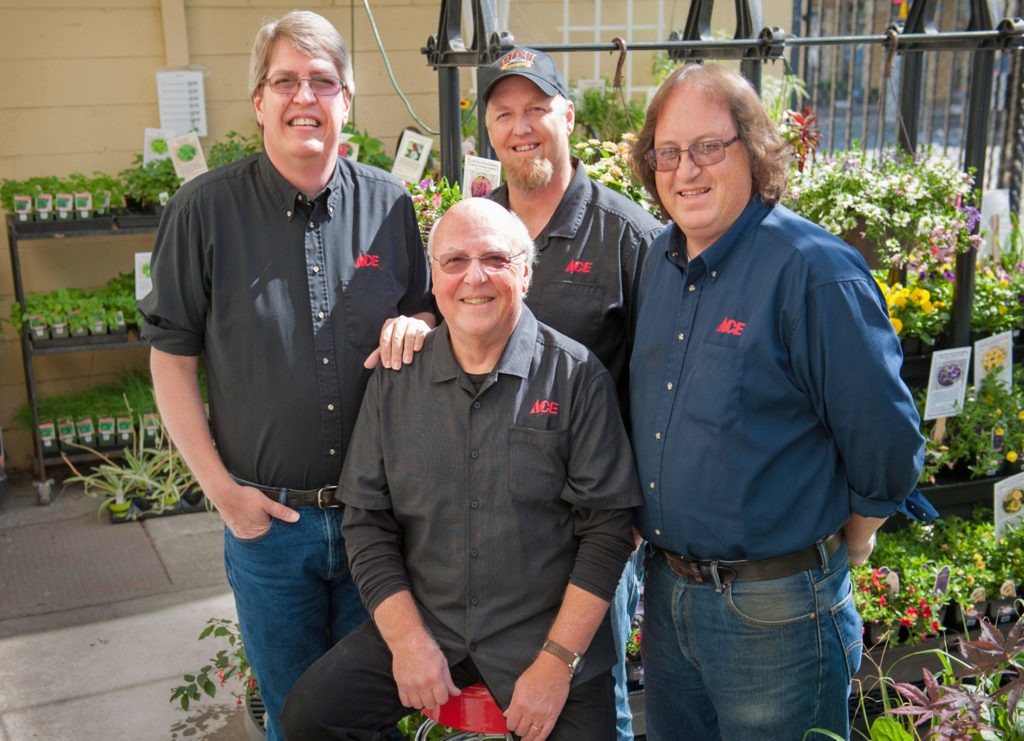 Russ Young, Pini’s CFO and treasurer and a member of the third generation of his family to own and operate the landmark hardware store, said the business started in 1918 when Henry Pini, a Swiss immigrant, opened a general store in the Marin County community. The store initially sold dry goods and groceries, but soon added hardware. A few years later, the store moved down the street and expanded to sell hay, grain, feed, coal, clothes, hardware, and groceries, along with fresh meat, chicken and eggs.

In 1929, Pini built a modern store and became one of the largest employers in town. But shortly after he died in 1942, his widow, Mary, sold the business and the rights to use the name to three local men, who jointly owned it until 1968, when Russ’ grandparents – Ben and Ellarene Young – and the Saunders family partnered to buy it. Charles Young and Steve Saunders purchased the business from their parents in 1983 and the Young family bought out the Saunders’ interest in 2015. Today Charles and his three sons – Tom, Russ, and David – are the owners.

Like many retail businesses, Pini competes with big-box stores that can offer larger selections and often lower prices. But being a family business is an important asset if you’re David taking on Goliath.

“We can provide customer service but they’re too big to do that,” Young said. They can’t provide the personal attention we can.

“We’ve been really lucky so far. People have embraced our store. We’re community-oriented and at one with the town. And we have better relations with our staff. We’re kind of a big family. We care about our employees and we want them to be happy in their job. We don’t have huge corporation rules.”

Pini has one manager who has been with the company for more than 45 years and several others who have worked there between 15 and 20 years.

And as Young said, the family is deeply involved in the community. They hold a number of sales events each year, participate in events with the Chamber of Commerce and other organizations, and are involved in fundraisers for schools and youth groups.

One of the highlights of the year is the store’s participation in the annual Fourth of July Parade, when family members and staff – and even some customers – march and do routines while swinging plungers. He said one year they decided not to participate and customers let them know in the months to come that they expected them back in the next parade.

Charles Young remains involved with the business and works a few days a week. Russ said he’s very business-savvy and gives his sons great advice on how to handle things. Older brother Tom is the COO and handles inventory, while younger brother David manages the sales staff and ensures they have the training and skills to keep the floor running smoothly.

While the brothers “bleed retail,” like many children they struck out on their own for a few years, managing drug and variety stores and in Russ’ case owning his own business for a few years before joining the family business permanently. Now, the fourth generation is already involved, with Russ’ nephew running the front office. And younger brother David has five children so there’s hope there as well.

The family joined FBA earlier this year in part to promote the importance of family businesses.

“FBA is beneficial to keep people aware that family businesses are important cornerstones of the economy and the communities we live in.”