Gov. Gavin Newsom has shown strong leadership during the past couple months in response to the coronavirus outbreak. Now he needs to unleash the power of private enterprise to protect our livelihoods.

He made the right decision in moving the state into a shelter-in-place strategy at a time when many people were still not convinced COVID-19 was that serious a threat. As a result, the virus has not had the same impact here as it has in many other large states.

It is also important that we continue to take prudent precautions to prevent a spike in cases or a later second wave of illnesses.

However, the unemployment statistics are beyond alarming. Nearly 4.6 million California workers have filed for unemployment benefits since March, and Newsom projects the state’s unemployment rate will peak north of 24.5%. In comparison, the jobless rate peaked at “just” 12.3% during the Great Recession in 2010.

While many counties are easing their shelter-in-place mandates and businesses are trying to reopen, many sectors of the economy remain shut down. And most businesses that are open or are trying to do so have had to radically rethink their operations to allow employees and customers to practice safe social distancing.

As a result, many of the state’s 1.4 million family businesses are struggling, even with the influx of federal assistance. If the strict quarantine lasts much longer, many of these businesses – and the 7 million jobs they provide – will be gone.

Needless to say, billions of dollars in tax revenues that state and local officials were counting on to provide the wide array of government services are gone as well. If the economy doesn’t rebound, the loss in tax dollars will be far greater, resulting in even more painful cuts.

We will not be going back to “business as usual” any time soon, but there are four things the governor could do to jumpstart the economy and help family businesses in particular before it’s too late for many of us to resume operations.

First and foremost, he should urge backers of the so-called split-roll initiative to stand down. Now is not the time to make dramatic changes to Proposition 13and burden struggling businesses with an additional $12 billion in commercial property taxes. Even in the best of times, raising business taxes by this huge amount would cause many companies to fail and cause many others to downsize or relocate out of state. Doing so now would be devastating to the economy.

Second, he should suspend AB 5. The prohibitions against independent contractors are so restrictive that they will make it hard for many family businesses to get back on their feet.

Third, he should work with lawmakers to provide protection during the rest of the year for employers against wage and hour lawsuits authorized by the Private Attorneys General Act. These lawsuits filed by trial lawyers can cost employers hundreds of thousands of dollars for paperwork violations even when workers incur no damages. Family businesses will need as much flexibility as possible to rebuild operations after this shutdown.

Finally, the governor has the authority to suspend the mandated minimum wage increases if economic conditions warrant it – and clearly they do. Holding off further increases until our family businesses can recover would be extremely helpful.

Ken Monroe is  chair of the Family Business Association of California, kmonroe@holtca.com. He wrote this commentary for CalMatters.

The following is FBA’s Public Policy Goals for 2020, as approved by the Association’s Board of Directors.

The Family Business Association of California, the only organization advocating exclusively for California’s thousands of family businesses, has named Sen. Jim Nielsen, R-Tehama, as its Outstanding Legislator for 2019. 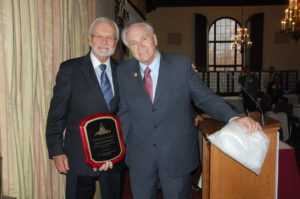 Nielsen said he was proud to receive the recognition.

“California needs strong family businesses because they’re the cornerstones of their communities and the foundation of our state’s economy,” Nielsen said. “I want to thank the leaders and members of FBA. It is an honor to be recognized.”

Nielsen was first elected to the Senate in 1978, serving until 1990. He returned to the Legislature in 2008 as a member of the Assembly and was elected to the Senate in 2012. He represents all or portions of Butte, Colusa, Glenn, Placer, Sacramento, Sutter, Tehama and Yuba counties. He serves as Vice Chair of the Budget & Fiscal Review and Elections & Constitutional Amendments committees and is a member of the Governmental Organization, Governance & Finance and Veterans Affairs committees.

He has been recognized by numerous taxpayer and small business groups for his leadership on state budget issues and for his unrelenting fight against profligate government spending. He is also a leader in protecting and strengthening private property rights and for reforming state regulations and out-of-control spending.

Founded in 2012, the Family Business Association of California is the only organization working exclusively at the Capitol to educate lawmakers and regulators about the importance of family businesses to the state’s economy and to their communities and to advocate positions on legislation and regulations. FBA has also taken the lead to defeat recent proposals to impose a state inheritance tax, which would make it much more difficult to keep businesses family-owned from generation to generation.

The US economy is clearly slowing.  After adjusting for inflation, GDP grew by 2.9% in 2018, and by an even better 3.1% in 19Q1.  But growth slowed to just 2% in 19Q2, is expected to grow at a similar pace the rest of this year, and to then slow further in 2020.  According to some pundits, this rapid slowing is a clear sign we are in the final stages of this economic recovery and that a recession is fast approaching.  They point out that we are in the 11th year of this recovery, making it the longest one in history, and as such we are simply due for a recession.  Fortunately, they are wrong, expansions do not die of old age.  Let me explain.

Prior to WWII, the idea that expansions were more likely to end as they got older was very common and was frequently mentioned in business and economics textbooks. And indeed, it was justified by the data.  Using a statistical technique called survival analysis, which looks at the probability of some particular event occurring given the age of the subject, be it a person or a car or sports team, it is clear that prior to WWII recessions were more likely to happen the longer the recovery.

The intuitive starting point is based on analogies to human mortality. In short, this presumption suggests that as an economic recovery ages, assorted imbalances and rigidities accumulate that hobble the economy and make it more fragile. As a result, a recovery is increasingly put at risk by smaller and smaller shocks, and it becomes increasingly likely the economic expansion will fall into recession the longer it lasts. Analogies to cars are also frequently cited. All else equal, as a car ages, the probability that it will suffer a mechanical breakdown increases. Thus, older cars are considered less reliable and generally command a lower price than new ones.

Happily, however, various postwar changes in the economy have contributed to more robust and longer-lived expansions!  One key change has been the rise in the share of services produced in the economy and the concomitant decline in goods.  This change has diminished the importance of inventory fluctuations and, as a result, has moderated the business cycle.

The role of the federal government has also drastically changed.  Since WWII, government activity has, among other things, increasingly focused on stabilizing the economy.  In short, the government has gone from a laissez-faire hands-off attitude towards the economy to a forceful, countercyclical policy. This approach has not only prolonged business cycles but has, importantly, eliminated the pattern of cycles becoming increasingly fragile as they age.  In a sharp reversal, it is now recessions that are increasingly likely to end the longer they last as policymakers take action to revive growth, such as passing tax cuts and spending increases and lowering interest rates.

In closing, enjoy the current expansion. Treat it like a good friend or a fine glass of wine and savor every extra month together. While it is almost ten and a half years old, it might well last another year, two if we are lucky. Better yet, the recession that follows is not likely to be particularly deep, as there are no asset bubbles in the making, nor are the sectors of the economy that usually drive us into recession growing inappropriately quickly.

Elliot Eisenberg, Ph.D. is President of GraphsandLaughs, LLC and can be reached at Elliot@graphsandlaughs.net. His daily 70-word economics and policy blog can be seen at www.econ70.com. 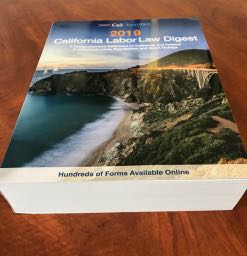 When I have a chance to meet with someone in the Legislature or from the Governor’s Office, I take them a copy of the Cal-Chamber’s 2019 California Labor Law Digest. The book is 8″ x 11″, 2 1/2″ inches thick, and has 1,061 pages. As I present the book, I tell them that if they would like to start a family business in California they will need to know everything contained in the book, follow it to the letter of the law, and even if they do that, probably will be sued.

The lawsuit might be generated by some accommodation an employer was trying to make to actually help their employees, like a late lunch so a person can eat with their co-workers, or skipping a break in order to attend their child’s Little League game. Our labor laws have done a great job of taking flexibility away from California employers who would like to accommodate an employee’s reasonable requests.

I also ask the person receiving the book to keep it in their office and when a new regulation is proposed, take a look at the book and ask, “Are 1,061 pages of labor law compliance requirements not enough? Would 1,200 pages be better?” It usually is an eye-opener for the person receiving the book and maybe, even in a small way, could make a difference in their decision-making.