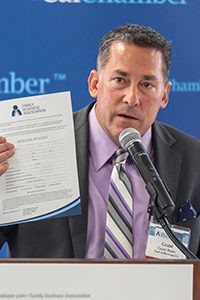 FBA Government Affairs Chair Grant Deary testified last week before the Senate Governance and Finance Committee in opposition to SB 993 (Hertzberg). The bill would impose a 3 percent tax on professional services purchased by businesses in exchange for a 2 percent reduction in the statewide sales and use tax. The bill has already been given the “job-killer” label by the California Chamber of Chamber due to tremendous impact it would have on all businesses in California.

Deary, who of nearly 50 speakers in opposition to the bill was the only business owner, testified on behalf of the FBA and discussed the specific impact on family businesses that may contract out professional services at a higher rate since several may not have the in-house expertise of multinational firms or to reduce needs for capital. In addition, he made reference to the challenges that firms like his, Nor-Cal Beverage, may have in apportioning the tax on contracts that contain both a good, that is untaxed, and a service, that may be taxed. This will increase tax liability and the entire bill will have significant compliance costs to family businesses.

While proponents argue that this service tax would only “target high-end services” — such as lawyers or accountants — these services are a part of doing business and the definitions in the bill of “qualified businesses” are broad. The result of any tax increase means increased costs for customers or businesses paying the difference. While the measure does include some exemptions including utilities, equipment, and machinery repair, as well as services necessary in food production, the result will still be higher costs. SB 993 also creates confusion for multistate businesses because the service tax only applies to services received in California. Additionally, all businesses will have increased costs of compliance attempting to understand and implement the tax requirements.

The hearing, which lasted nearly two hours and included robust discussion on all sides of the issue, was the first in a series of hearings intended to hear feedback on the proposed bill. The next hearing will take place on June 13.