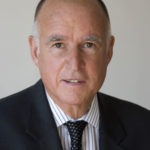 In his remarks, the Governor pointed to a number of far-reaching, bipartisan measures passed in recent years – from pension and workers’ compensation reform to the Water Bond, Rainy Day Fund, and the Cap-and-Trade Program – that demonstrate “some American governments can actually get things done.”

Some of the major points he discussed in his speech included:

The State of the State is often just a place where the Governor can expand upon his budget priorities and policy focus for the year.

California Democratic lawmakers have proposed a corporate income tax surcharge that would take half of the savings businesses get under the federal “Tax Cuts and Jobs Act” to fund programs for lower- and middle-income Californians. State Assembly members Kevin McCarty from Sacramento and Phil Ting from San Francisco introduced ACA 22, which would amend the state Constitution and create a 7 percent tax surcharge on corporations’ net income over $1 million, beginning January 2018. Revenue from the tax would be allocated to education spending and to services targeted to support lower- and middle-income Californians, including expanding the state’s earned income tax credit and providing funding for child care and healthcare programs.

California’s current corporate tax rate is 8.84 percent of net income; S corporations pay a tax of 1.5 percent of their net income. Schanz said the tax surcharge would apply to C corporations and S corporations but not limited liability companies, in order to protect small businesses. If approved by two-thirds majorities in the State Legislature, A.C.A. 22 would go before voters on the November 2018 ballot.

According to Ting and McCarty, the measure is in response to the recent federal tax reform that reduced the federal corporate tax rate from 35 percent to 21 percent, a 14 percentage point reduction. A release from McCarty’s office explained that the proposed 7 percent surcharge would be equivalent to half the savings California companies will realize from the reduced rate.  The Sacramento Bee has reported that proponents of the measure estimated it could raise as much as $15 billion to $17 billion annually.

The lawmakers said the corporate tax cut will force reductions to federal spending on programs for the poor and for middle-income earners. “It is unconscionable to force working families to pay the price for tax breaks and loopholes benefiting corporations and wealthy individuals,” Ting said in a statement. “This bill will help blunt the impact of the federal tax plan on everyday Californians by protecting funding for education, affordable healthcare, and other core priorities.”

The measure isn’t the only legislation California lawmakers have proposed in response to the new federal tax law. One high-profile proposal by Senate President Pro Tempore Kevin de León, D-Los Angeles — S.B. 227 — would circumvent the new federal cap on state and local tax deductions by providing a state individual income tax credit in exchange for taxpayers’ charitable contributions to California. Taxpayers could then claim the federal charitable deduction instead of the capped SALT deduction.