More than 70 Members get latest information at Family Business Day

More than 70 FBA Members and guests heard the latest information about developments at the Capitol at last week’s Family Business Day and Legislative Conference — including the hot-off-the-presses news that legislation to reinstate the estate tax in California is apparently on hold. 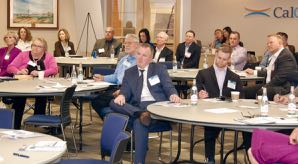 As reported in last week’s News Summary, FBA’s lobbying team of Dennis Albiani and Faith Borges told attendees that after FBA quickly assembled a coalition of some 30 business-oriented organizations to oppose SB 378, the Senate leadership decided to not refer the measure to a committee for a hearing.

While no bill is ever completely dead until the end of the two-year session, the leadership’s action means that the bill by San Francisco Democrat Scott Wiener will likely not advance this year. The bill would authorize voters to overturn a 1982 statewide vote and allow lawmakers to reimpose the death tax in California.

“After seven years, we’re starting to infiltrate the minds of the political folks here in California,” Albiani told attendees. “We’ve been asked to engage on several other bills and we do engage when appropriate.”

FBA continues to focus on several other top public policy priorities, including efforts to create a split roll that would reassess commercial properties every three years. Albiani called the proposal “probably the biggest threat for the next year” as lawmakers are pressured to enact legislation to create the split roll before an already-qualified ballot measure is voted on in 2020. 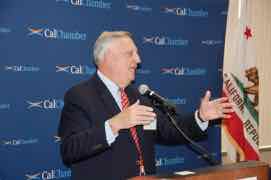 On the one hand, Walters said having more Democrats in each house than the two-thirds majorities needed to enact tax increases allows party leaders to let some members vote against tax bills, increasing the chances such legislation will have enough votes to pass. But on the other hand, he noted that several new Democrats were elected in historically Republican districts and will have to vote their districts in order to be re-elected.

And while there is strong pressure from progressive elements to move California to the left, the costs will be daunting.

“We have 6 million kids in K-12 public education. To get California into the top tier of education spending would cost $5,000/year in per-pupil spending, or about $30 billion. For just that one priority, the state would have to increase income tax collections by one-third or double the sales tax,” Walters said.

And in a state where voters are willing to tax others — the rich and smokers, for example — they have shown a reluctance to tax themselves.

“The Legislature would have to be willing to significantly raise taxes on the middle class” to fund expansive increases in state spending. “They can’t get there without taxing a broad spectrum of California voters.”

Ned Wigglesworth, the CEO of Spectrum Campaigns — a firm specializing in ballot measure campaigns for the business community — said there is a significant chance the split roll measure will be on the ballot in 2020, but also said there’s a significant chance it will be defeated if voters can be educated that raising property taxes on businesses will likely be followed by efforts to raise them on homeowners as well.

And he warned business owners that they needed to be engaged, citing the fact that a single-payer healthcare bill passed out of the Senate during the past session before being held up by the Assembly speaker. 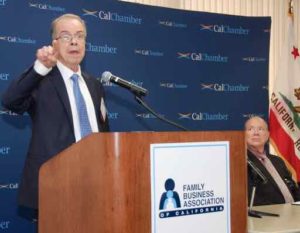 Bruce Scheidt, senior partner with the Kronick Moskowitz law firm, an FBA Statewide Sponsor, discussed the perils of the Private Attorneys General Act (PAGA), which allows individuals to sue over Labor Code violations on behalf of the state.

Scheidt said the law was a gift to trial lawyers from former Gov. Gray Davis and that significant reform is all but impossible legislatively because of the clout the trial lawyers have over Democratic lawmakers and the fat the state receives 75 percent of any penalties agreed to in settlements. He said PAGA really stands for “pandering to attorneys’ greed and avarice.”

He also warned that business owners can be held personally liable as well, urging FBA members to redouble efforts to comply with the 9,000+ provisions in the three-inch-thick Labor Code, such as making sure that paystubs contain the full legal name of the company, not any sort of abbreviated version.

He also said employers need to vigilantly enforce meal break laws, even if the employees don’t want to take breaks when the law requires them. He said one approach is to issue written warnings for a first violation and to suspend violators for a subsequent violation.

“For meal and rest violations, you need a zero-tolerance program,” he said.

Taxpayer advocate Jon Coupal, president of the Howard Jarvis Taxpayers Association, filled in at the last minute for Joel Fox, who was ill. He was optimistic that a split roll measure would be defeated if it appears on the ballot next year. 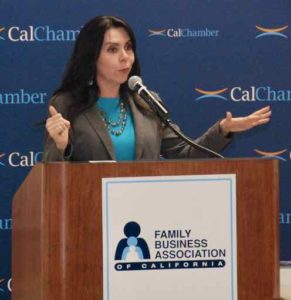 “People in my district depend on local businesses to survive,” she said of local job creators. “I love social programs, but I realize that if I don’t have a tax base, who’s going to pay for those programs?”

Attacked by a primary opponent as “Big Oil Blanca” for being supported by oil companies, she said she’s in a good position because having been opposed by party leaders and labor in her first campaign, she can represent her district and what’s good for California.

“My constituents want a roof over the heads, food to eat and good schools for their kids. We depend on business and our infrastructure to create good bedroom communities in the San Gabriel Valley,” she said.