By Dennis Albiani and Faith Borges

Democratic supermajorities were sworn into both houses of the Legislature in December and the New Year brought in a sweep of Democratic statewide office holders being sworn into office, the most notable being Governor Gavin Newsom. The success of Democrats was of little surprise in a state where GOP registration has fallen to a third-party level, trailing registration of decline-to-state voters. 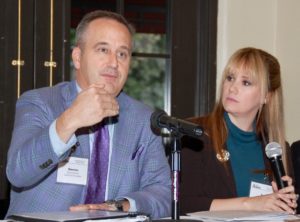 However, what was surprising was that within a few hours of taking the oath of office, the new Governor took to Facebook Live to sign a number of first-in-the-nation executive orders. Subsequently, within just a few days being sworn into office, Governor Newsom departed from the brief remarks of his predecessor and gave a lengthy presentation of the largest proposed budget in the state’s history.

Press releases, tweets, and a 280-page budget summary has affirmed speculations carried over from a long campaign trail that the new administration has a pretty long wish list of policy priorities for the coming months and years. How to fund this list will be the topic of debate before a final state budget must be passed on June 15th. Here are a few of the big-ticket items that are likely to be the focus for business community engagement.

One of labor’s top priorities this year will be codifying the state Supreme Court’s Dynamex decision, which made it tougher for businesses to rely on independent contractors. Businesses fear that the decision will hurt the growing gig economy and will hinder their ability to hire temporary staff or part-time employees. There is currently placeholder legislation from both sides of the aisle that will be amended in the coming weeks with partisan efforts to tackle the issue.

The Governor’s budget proposes efforts to expand the paid family leave (PFL) program, which allows employees to take time off to care for a new child, an ill family member, or to recover from a serious illness and receive 60- to 70 percent income replacement, which is funded through deductions from employee paychecks. Assembly Member Loren Gonzalez Fletcher, D-San Diego, has introduced placeholder legislation to extend the use of the state’s PFL program from six weeks to six months and guarantee 100 percent wage replacement for workers earning up to $100,000 per year. The budget will go through several months of reconciliation in the Legislature and there are still several weeks before the deadline to introduce policy bills.

Taxes are sure to be on the agenda of the Legislature and new administration. Imposing a sales tax on services has been proposed for several years. California’s boom-and-bust revenue cycle can make it difficult to provide consistent funding for state programs, including education and social services, and this has created many discussions on how to reform our tax code. Some legislators propose that a sales tax on services will “modernize” the tax code, more properly representing the state economy and flattening out the cycles. However, it could cost small businesses tens of billions of dollars in taxes annually.

Proposition 13 provides both residential and commercial property taxpayers important protections, including a uniform 1 percent property tax rate and limited yearly increases in assessed value to no more than 2 percent. In an effort to raise billions of dollars in new taxes, a new “split roll” would split commercial properties from residential and bring those property taxes to current market value, causing drastic cost increases for small-business owners who own and rent commercial property space. A split roll initiative has already qualified for the 2020 ballot and there is speculation that proponents will leverage the legislative process with the existing initiative.

Beyond these specific policy issues, business owners are more broadly hoping for a more receptive audience among legislators and the new governor in the new year. We hope policymakers view the employer community as a partner — not an adversary — in accomplishing many of our shared goals, and we hope there is a deeper appreciation for the many challenges employers face in the state.

The Family Business Association of California remains poised to represent family business to the Legislature to encourage positive reforms and to defend against hostile, unfavorable legislation. If you would like to participate in these legislative efforts, please plan to attend the Capitol Conference on May 14th and email Executive Director Bob Rivinius. Thank you for your membership and investment in family businesses.